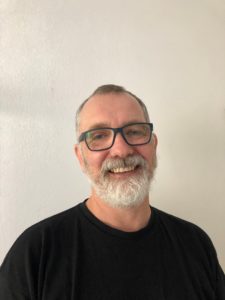 Vladimir Arsenić (1972) was awarded M. A. in Comparative Literature by the University of Tel Aviv and M.A. in Literary Theory by the University of Belgrade. He is a staff  writer of the Serbian web portal xxzmagazin.com and the Croatian web portal booksa.hr. He has published articles in portals, journals and magazines such as Beton, Quorum, pescanik.net, proletter.me and versopolis.com. He has acted as a mentor within the project Criticize this! In collaboration with Srđan Srdić he conducts Hila creative writing workshop, and co-owns publishing house Partizanska knjiga. He is a regular contributor to the literary festival Cum grano salis in Tuzla, Bosnia and Herzegovina and is a member of the Bosnian PEN Center. His texts have been translated into English, Albanian and Slovenian. He translates from English and Hebrew. He is a member of the editorial board of the literary magazine Ulaznica issued in Zrenjanin, Serbia. In 2019. his first book of collected essay on Montenegrian literature The Ethics of Narration has been published. He is a Tottenham Hotspur FC fan.

Dasa Drndic and the post-truth politics

It is self obvious fact that we are living in post-truth world. The very notion designates that the truth is in a way unobtainable, that it is somehow beyond our reach, and not only because it is hidden, or mysterious, but by a simple fact that there are instances which are very much concerned with putting the factual truth out of our sight. Factual truth, the one that can be crosschecked through evidence, and put under scrutiny of proofs is nowadays very often changed with the post-truth, the emotional one with which the power and the community are blackmailing its subordinates and/or memebers. For instance, if you are a Serbian citizen it would be expected of you not to talk about the genocide, but about mass murder and organized crimes of large proportions that had happened in the region of Srebrenica in July of 1995., in spite of the International Court of Justice ruling from 2007. This appeal is emotional in several reasons. Firstly, because one wouldn’t like to connect ones homeland with most disgusting crimes. Secondly, by doing so one would endanger Serbian prosperity because the state would have to pay compensation. Finally, the role of the government would be investigated, and that would not be nice for everyone was involved one way or the other, actively or passively. So unless you are very interested in facing the past and finding out what really happened and one can do that rather easy, you will accept the official interpretation of the truth, the one served through the official media in Serbia, the emotional one, the post-truth that stands instead the factual truth.

Serbia is not unique example. Quite the contrary, the whole world is drowned in post-truth poltics and that is yesterdays news. But what is the role of the literature in these circumstances since the truthfulness of art according to Aristotle’s Poetics is universal, and not particular. To quote: „But they differ in this, that the one speaks of things which have happened, and the other of such as might have happened. Hence, poetry is more philosophic, and more deserving of attention, than history. For poetry speaks more of universals, but history of particulars.“ Let me argue that it could be exactly the field in which we might look for reinvention of the role of literature in todays society, in which the media are corrupted and particularized and vulgarized, and the social networks are taking over the space of public debate which is, in turn, becoming exactly like them, according to old McLuhan’s teaching – medium is the message. It is very personal, very non argumented, and very emotionally intense – one could not expect anything else from Twitter or Facebook. The factual truth, on the other hand, should not be like that – it should be objective,  proved, measured, and calm.

The field of literature is changing. Or to be precise it has changed forever right after the invention of internet. The times are fast and furious, they can not stand anything that takes time. And literature does take. A lot. But that is why there is a chance to be calm and objective, and measured, and proved. One can put into literature things that once should have been in media. Of course not in the same way, not by turning fiction or poetry into newspapers, or opinion pieces, but exactly by being truthful. I know it sounds silly, but let me give you an example.

One of the most acclaimed Croatian authors abroad is Daša Drndić. Her novels have been translated into more than 20 languages and received very positive critical response all over Europe and in the States. But she have not won any important literary award in her homeland. She had been shortlisted several times but that os all. One may ask why, and the only truth is that she is writing about things that are not very pleasent for the ears of those in power. She is writing without any restraint about the rise of clericalism, nationalism, very harsh and rude capitalism, in other words about the things that are occuring in Croatia and elsewhere in the Balkans and Europe. She is not dealing with any emotional truth as one would expect from the point of view of literature, and not with, or not only with the things that might have happened, but with very specific and precise truths about some of the crimes that had happened during the nazi or ustaša regime. That simply means that her novels are well documented and subjected to research that led to the construction of the plot. For her books are novels in the strict sense of the word, they are fictious, the protagonists are not historical characters, but the scenery and historical circumstances are thoroughly researched. Daša Drndić has readership and no one can deny her success, but the establishment is silent because they are concened with the post-truth poltics. She and the likes are not welcomed in todays Croatia in which, as in Serbia, the role of partisan movement in the Second world war is questioned, murderers and war criminals are restored, and factual truth about our past and present is very often blurred and changed with the emotional one.

Daša Drndić’s work is just an example for what I am proposing here – a slight change of roles. Because they usurped the media, we should turn back to literature, to art as conveyors, among other things, of factual truth. It is not as fast as the internet, radio, TV channels or even newspapers, but there is another advantage, it lasts forever.

Translated by the author, edited by Ana Schnabl.

We use cookies to ensure that we give you the best experience on our website.OkNo